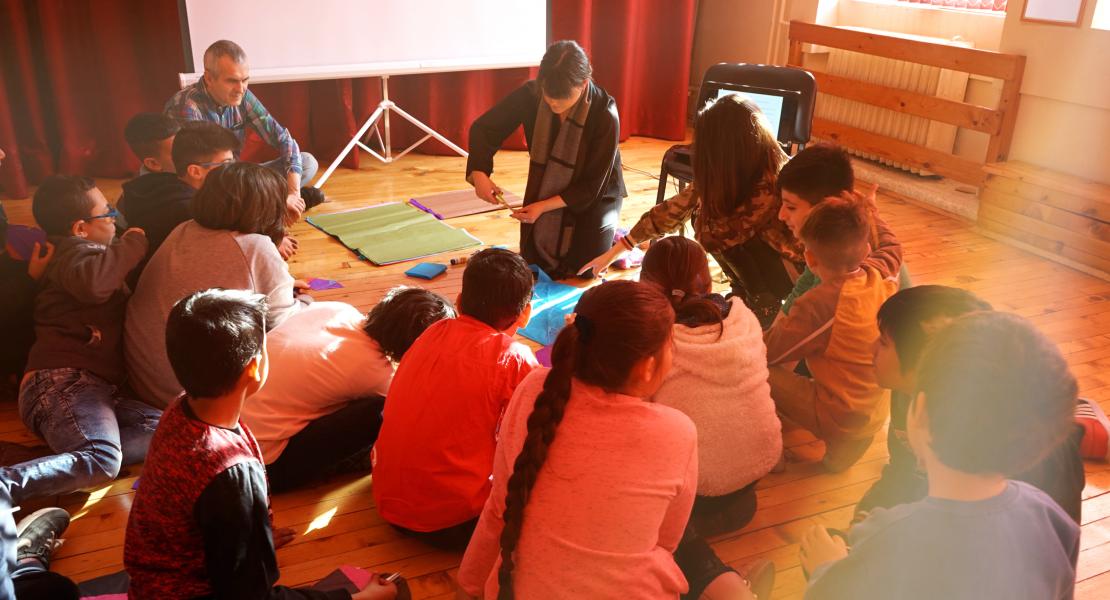 On 9th of February, 2018, Multi Kulti Collective organised an art workshop in 66 “Philip Stanislavov” school in Ovcha Kupel in Sofia, where our host from Canada, Hangama Amiri, showed 25 students from third grade from Afghanistan, Syria, Iraq and local Bulgarians, including children from the Roma community, how to make traditional Afghan kites. Forced to leave her hometown, Kabul, Afghanistan, because of the war, Hangama and her family were granted a refugee status in Canada and settled there. She began painting and later studied art at NSCAD University in Halifax, as well as at the Yale University School of Art and Science in the United States. She started to make art exhibitions in and outside Canada, drawing inspiration from the faces of women in Afghanistan and memories of her childhood in Kabul. Hangama is also interested in feminism in Afghanistan, studying it deeply and admiring the strong women in this society. Moreover, she organises workshops for children from different communities, where they make kites together.

Using a PowerPoint presentation, Hangama told the kids about the kite culture in her country – this is the most popular game among kids and adults from all walks of life. Then all children had the opportunity to make their own kite using special bamboo sticks and paper. Finally, the children let all of their kites in the sky in the school yard and played with them.

In Bulgaria, Hangama’s workshop for making Afghan kites took place in 66 school in Sofia. The school was established in 1956, where from 1999 till today the school principal is Mrs. Nelly Todorova. The school is a great example of tolerance and respect for the different ones. It seeks to educate students in the spirit of these values, since many of them are children of refugees and migrants whose countries have another mentality and culture.

The workshop took place with the priceless help of the volunteers – Hangama Amiri, Darina Stanoilova, Gratsiela Hristova, for which we are very thankful. Our Multi Kulti Children’s Programme is running for a third year. It aims at bringing together Bulgarian and migrant/refugee children in order to overcome social barriers while participating in cultural, educational and sport events. Children and youth between the ages of 6 and 18 have the opportunity to get to know each other in a safe informal environment, to increase their knowledge and improve their skills, to have fun and create common memories and friendships. The Programme has been actively supporting the two-way integration and building bridges between different cultures thus enabling children to live in a community free from prejudice, discrimination and xenophobia.

In 2018, the Multi Kulti Children’s Programme is supported by 1000 km Balkan Charity Challenge and private donations. Thank you!